VMware regularly releases updates to its Powershell module known as PowerCLI. While in the past you had to go to the vmware.com website, download the executable - by the way, you still can for older versions - and install PowerCLI, you no longer have to since there's an easier way directly from a PowerShell console.

If you do have an older version that was installed via an executable installer, please uninstall it via Apps & features under System Settings before proceeding with the examples shown here.

Assumption(s) made:
You have vCenter Center Server joined to your domain and configured as an Identity Source if you want to login with domain credentials, otherwise you'll need to log in with local credentials like the SSO account, This email address is being protected from spambots. You need JavaScript enabled to view it..

Don't have this configured? Learn how to: Join VMware vCenter Server to Windows Active Directory and add AD as Identity Source

There is a requirement for installing PowerCLI and that is to have, at a minimum, PowerShell 3.0 installed. If you have the latest Windows 10 release, you will have no problem installing it. If you need to verify the version installed on your system, run the following command and look for the PSVersion in the output:

This will be the output you should see:

Warning! Open up a PowerShell console with admin privileges before trying to install PowerCLI.

Run the following command to install the latest version of PowerCLI.

If you need to install a specific version of PowerCLI, you may run the following:

To list all the versions available for install, type the following:

To uninstall PowerCLI, type the following command to include all available versions of the module:

First, let's save our credentials to a temporary variable by typing the following:

You should see an authentication dialog box. Enter your credentials. 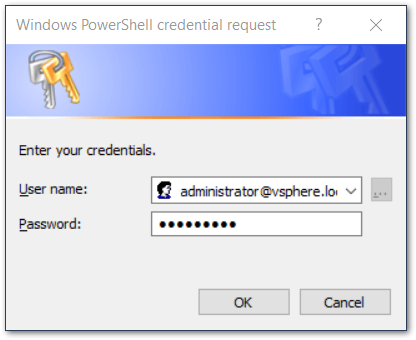 By creating a temporary variable that stores your credentials, you can log in to multiple vCenter Servers or reuse it to login again if you lose your connection to vCenter Server.

If you connect successfully, you will see the following output showing the name of your vCenter Server.